towns served By This office

INFORMATION ABOUT THIS TERRITORY 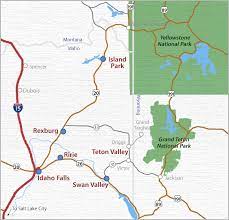 Jackson Hole Valley is composed of the towns of Jackson Hole, Hoback Junction, Moran, Pacific Creek, Wilson, Moose and Teton Village. The Valley lies between the Gros Ventre and Teton mountain ranges in the U.S. state of Wyoming, near the border with Idaho.

The term "Hole" was used by early trappers, or mountain men, as a term for a large mountain valley. These low-lying valleys, surrounded by mountains and containing rivers and streams, are good habitat for beavers and other fur-bearing animals. The Valley is 55 miles long long by 6-to-13 miles wide with an average elevation of 6,800 ft., its lowest point being near the southern park boundary at 6,350 ft. The Valley leads to the south entrance of Yellowstone National Park.

Jackson Hole is situated outside the boundary of the Yellowstone Super Volcano.  When this volcano finally explodes, the entire Jackson Valley and all its inhabitants will be instantly liquefied and covered by 100' of ash, rock and lava.

REQUEST SERVICE IN THIS AREA