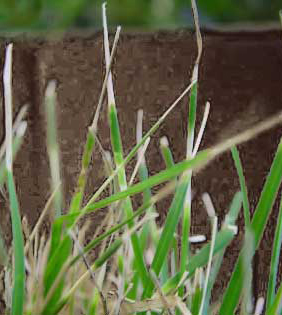 
Ascochyta leaf spot symptoms may develop throughout the growing season.  In Wyoming  we have made a connection between fertility levels carried over from previous seasons to be a common denominator in lawns that acquire this disease early in the spring.  The disease is most commonly discovered during hot, droughty periods that were preceded by cool, rainy conditions. Large irregular patches of turf rapidly turn a straw-color and appear dead. The overall appearance of the disease may resemble drought stress, except that the symptoms of Ascochyta blight appear quickly (i.e. sometimes overnight).

Although the blighting within an area appears complete from a distance, healthy leaves are interspersed within the patch. One of the traits of this disease is that the top of the grass blades have a pinched, brown top that comes to a point.  This can be mistaken for dull mower blades so ask one of our customer represenaitives to correctly identify this problem for you.

Leaves infected with the Ascochyta fungus often exhibit a bleached tip dieback that extends approximately a third to halfway down the leaf blade. The margin between healthy and diseased tissue is abrupt and slightly pinched. 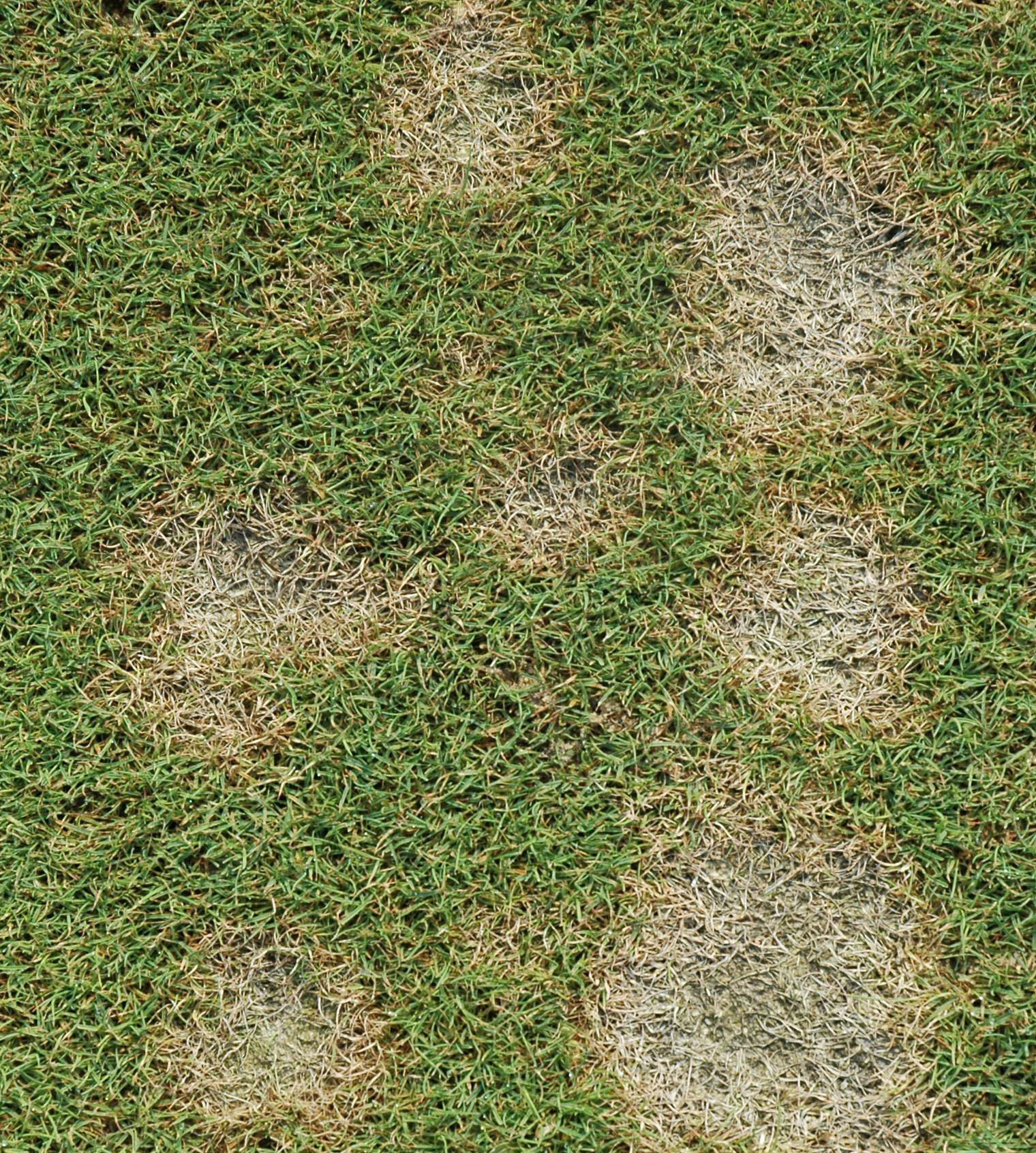 Dollar Spot disease affects lawns during heavy and humid dew periods that are stressed by drought.  Dollar spot, named after the (old time) silver-dollar sized spots that are straw-colored 4 to 6 inch wide spots.  Grass blades have light tan bands with reddish brown margins spanning across them.  These bands or lesions in most cases resemble an hourglass laid on its side.  The dollar sized spots may start to merge and overlap to form large, irregular areas resembling the symptoms of other leaf diseases as it progresses.  Grayish white cobweb-like mycelium may also be present in early morning as the sun is rising, that quickly goes away as the dew dries off the turf.  It is important that if you see any of these symptoms, call a Green Turf Lawnscapes office nearest you and have it looked at promptly. We offer FREE Evaluations and there is never any obligation to purchase a service. 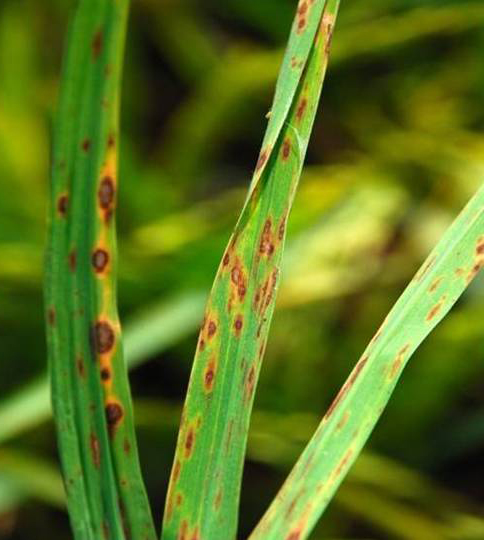 Leaf Spot/Melting Out is one of the most common turfgrass diseases. Insect or drought injury can mimic leaf spot and melting-out. If the symptoms are mistaken for drought stress, and water is applied to remedy the situation, grass health probably won't improve. In fact, additional moisture could cause the disease to become worse. Raking the dead grass out can be catestrophic by aggravating the disease and making it worse overnight.  It is best to call a Green Turf Lawnscapes staff member to make a correct identification first.

Leaf spot or Melting Out diseases can be so  severe it can result in the thinning or complete death of an entire lawn.  Outbreaks can occur from April through October, especially when weather conditions are warm and humid. In advanced stages, melting-out (thinning or death of the grass) may occur in large areas that can encompass ones entire lawn.

The spores of this disease have the ability to stick under the deck and onto the wheels of a lawn mower.  If you have a diseased lawn make certain you clean out the grass gunk and sterilize the underside and wheels before mowing the next week.  Commercial mowing companies need to clean and sterilize between clients if they mow a lawn with active disease in it! 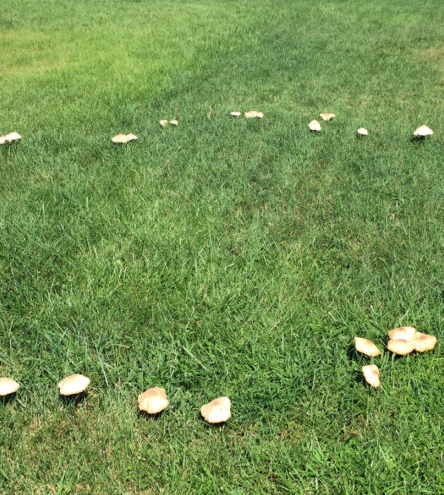 The first signs of fairy ring a homeowner may notice are small clumps of mushrooms popping up in a half or complete circle 4-20 feet in diameter. As the fungus that  causes the fairy ring grows within the lawn, it breaks down organic matter.  This process results in additional nitrogen becoming available to the grass, creating the dark green appearance.  Eventually, mycelium from the fungus will grow into such a dense mat, the grass in the center of the ring may die from water deprivation.  When this occurs, the fairy ring begins to expand in search of new organic matter to consume.

It will require a Green Turf Lawnscapes technician to positively identify fairy ring, as many other turfgrass diseases present themselves in a similar fashion.

Fairy ring is most likely to occur in lawns that have had organic material buried, such as stumps or old lumber that was graded over.  Everyone has heard the saying "builders bury their mistakes"?  The tree stump that was ground out still had massive roots that were not removed.  Up to forty (40) years after  the event that buried the lumber or an old tree that had been removed and after a moderate rainfall or the addition of a new sprinkler system the symptoms can present themselves. 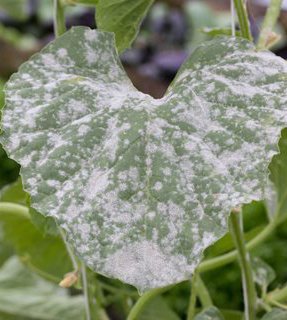 Powdery mildew is a fungal disease that occurs most commonly on the cool-season grasses such as blue-grasses and fescues. The fungus is usually as a white washing on the grass blades facing upward. This growth rapidly becomes more dense, and may cover the entire leaf, giving it a gray-white appearance. In cases of severe outbreaks, entire sections of lawn may be dull white rather than green.  This disease blocks sunlight and causes the blade to turn yellow and die.  Call Green Turf Lawnscapes to positively identify this disease and recommend the proper Rx.

It will require a Green Turf Lawnscapes technician to positively identify fairy ring, as many other turfgrass diseases present themselves in a similar fashion.

Fairy ring is most likely to occur in lawns that have had organic material buried, such as stumps or old lumber that was graded over.  Everyone has heard the saying "builders bury their mistakes"?  The tree stump that was ground out still had massive roots that were not removed.  Up to forty (40) years after  the event that buried the lumber or an old tree that had been removed and after a moderate rainfall or the addition of a new sprinkler system the symptoms can present themselves. 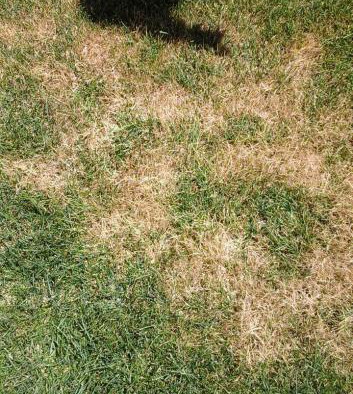 Necrotic Ring Spot (NRS) is a fungal disease that primarily affects bluegrass. It causes brown rings to form with green grass growing inside the center of the ring.  The rings are normally 1-3 feet in diameter.  This disease also presents itself as the letter "S" that can be 1-2 feet wide and 3-5 feet long.  It also can present itself  shaped as the letter "C".

Other diseases or site conditions can be confused with necrotic ring spot; therefore, an accurate diagnosis by a  Green Turf Lawnscapes diagnostician is crucial to identifying the pathogen to properly address management of the disease. Management of this disease is difficult and requires an integrated approach utilizing cultural, chemical, and varietal control measures over a two to three year period of time.  It is very possible to transmit this disease to other lawns by exporting the diseased soil particles via a shovel, wheel barrow, football cleats or golf shoes. 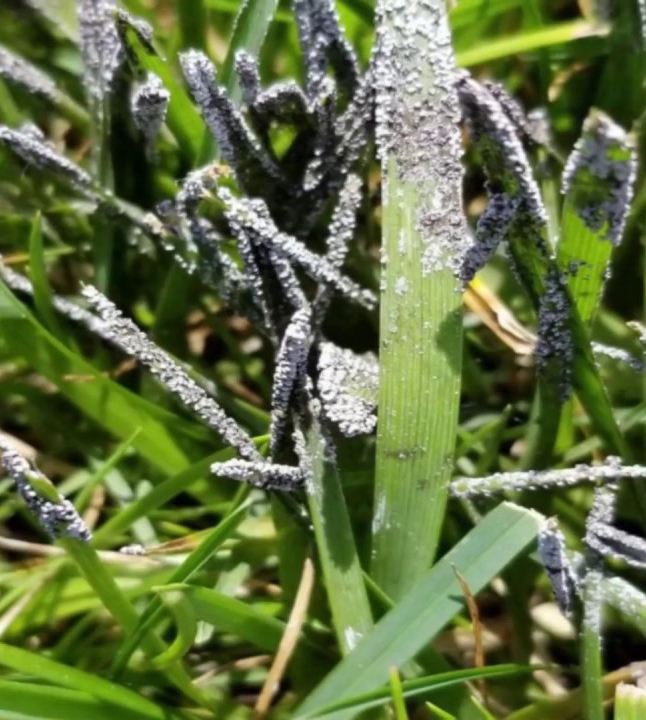 Slime Molds can become active in lawns with an underlying soil condition.  Grass blades and the surface of the soil may be covered with a translucent slimy, creamy-white growth. In a few days, this slimy growth changes to pinhead-sized masses of various colors (usually gray or blue). The affected areas may be from a few inches to many feet, with shapes ranging from rings to streaks or patches.  Call to request a free evaluation.

BACK TO MAIN GALLERY